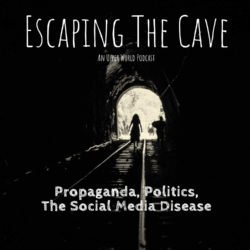 Todd discusses collective human boredom in relation to the need for a sense of purpose, struggle, and the addictive rush of just feeling alive. How a dormant survival instinct comes alive during a crisis and how, absent that, we’ll manufacture one just to have something to endure, battle, and survive. Also, some some predictions for the 20’s. Book those children’s parties now! Also: San Agustin, The Special Tour, and an evening with Pablo Escobar’s “chemist” A naked man kills a fer-de-lance Men, middle age, and the power plant Healthy anxiety vs. fear This election won’t matter The tyrant is in the eye of the beholder The Titan Tragedy Podcasters: they’re spammy and slimy. ^They call that foreshadowing * Subscribe on any podcatcher that doesn’t suck.* Also check out www.escapingthecave.com and www.christophermedia.net* F**k Twitter